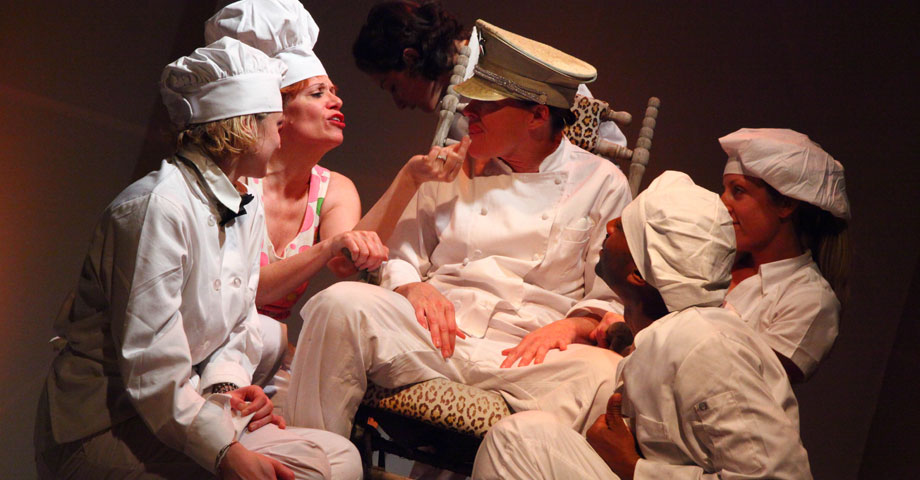 Written by UK author Kay Adshead, directed by Elena Vannoni and produced by Gemma Sonego, the play’s amazingly fearless and talented ensemble cast is: McCready Baker, Liz Davies, Micki Morrison, Amaia Perta, Chris Gardner, and Melissa Virgo. The one-act play offers a series of seven vignettes, structured like the courses of an elaborate meal — but it’s a meal being served at “the diner at the end of the world.” Each “course” tells a story in a loose chain of delicately, poetically interconnected scenarios of abuse and misunderstanding that take place in far-flung locales from Afghanistan to Texas and Guantanamo Bay.

Since its London debut in 2005, the controversial and troubling themes addressed in Adshead’s play have become, tragically, even more timely and current than ever. As the action moves through the menu from soup to meat, rape and rebellion to dessert and water-boarding, the plot introduces topical issues of human cruelty and injustice from racism to sexism, religious persecution, corruption, oppression of more subtle and insidious varieties, revenge, desire, justice, perversion, and politics. The deft use of humor in the script and the physical action peppers the otherwise emotionally heavy action, and takes the audience on an intimate and intense emotional roller coaster. There’s just enough beauty, hope, and comic relief in the script and blocking to periodically lull the audience into letting their collective guard down — before delivering the next knock-out blow. The innovative set visually supports the interweaving narrative threads, creating a field of unity from which the cast never strays. They move like felines in and out, under and over the sprawling central set-up, each time re-emerging in a new stance of character, style, gender, and conscience. Every actor has his or her break-out moment over the course of the play, whether or not they survive their fates; and the diversity in their back-stories and personae gives every single audience member someone to relate to and thus a way into the powerful, convergent story line.